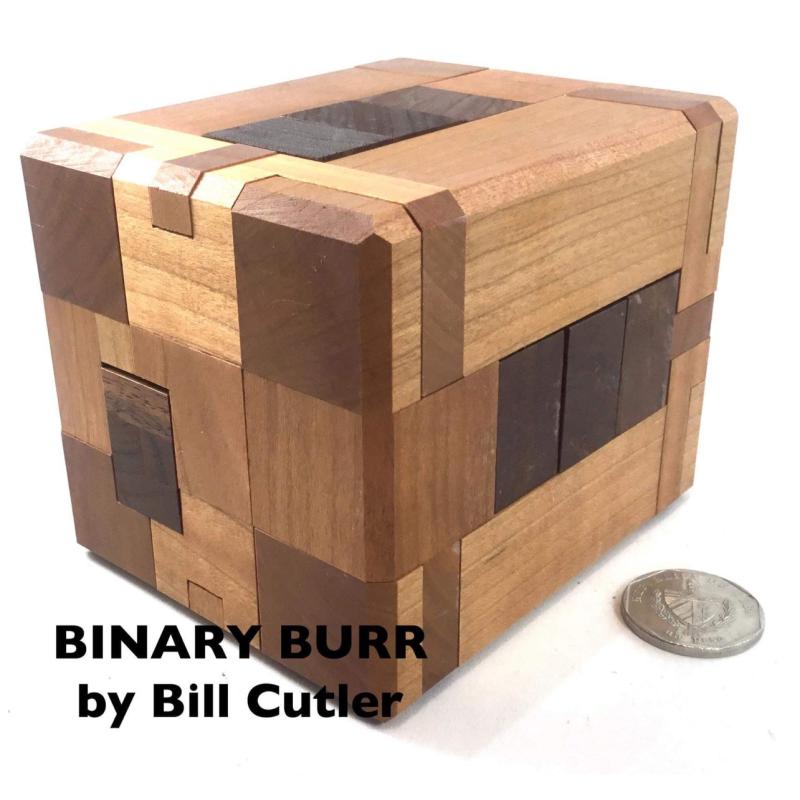 This burr puzzle is a classic Bill Cutler design, wonderfully crafted by Eric!

“The Binary Burr is a classic Bill Cutler design. It was awarded a First Prize at the 2003 IPP Puzzle Design Competition, and has been unavailable for several years. Here is what Bill has to say about it:

"The Binary Burr is a burr that functions like a 6-ring version of the Chinese Rings. The puzzle consists of 21 pieces. One is equivalent to the 'bar' in a Chinese Rings puzzle, and six others are equivalent to the 'rings'. The other 14 pieces in the puzzle construct a 'cage' or 'box' that holds the other pieces in place. The entire puzzle should perhaps be called a 'boxed burr', and might be more logically constructed with only a solid wooden cage, however Bill chose to dissect this outer shell into smaller burr-like pieces.

To disassemble the puzzle, the rings and bar must be manipulated until the bar is freed. After the bar is removed, then the rings can be removed one-at-a-time, and finally the remaining pieces come apart easily.

Construction of this puzzle was tricky. The humidity in my workshop was fluctuating wildly, so I opened up the tolerances more than I usually do to make sure the final product wouldn't bind up or get stuck. The good news is that I was successful there - this puzzle should work in all humidity conditions. The bad news is that the puzzle turned out looser than I would have liked, having perhaps .035 inch cumulative tolerance variation. In practice this means that while the puzzle looks and functions fine, it's a little looser in the hands than my normal standards. I have subsequently discounted the price quite a bit from the $200 I had planned to charge.

Each puzzle is signed and dated; 39 copies made for sale. Ships assembled”

Shipping cost to be calculated at close of auction.